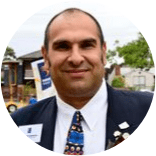 2000 VIC Young Australian of the Year

His remarkable academic ability has seen Milosh Ivanovich go from a nine-year-old immigrant who didn’t speak English, to attaining his PhD in Information Technology by the age of 22. He is currently one of the nation’s most authoritative voices in the field of teletraffic engineering and network modelling.

Milosh attended East Oakleigh Primary School for two years and then enrolled in a program for gifted students at University High. He obtained his high school certificate at the age of 15 and became the youngest full-time student enrolled at Monash University at that time.

At 19, Milosh obtained his degree in electrical and computer systems engineering and went on to complete his master’s degree in just seven months. In 1995, Milosh was awarded the Ian Langlands Medal of the Institute of Engineers for being the best graduate from all engineering faculties within Victoria during that year. Milosh then took only two years to complete his PhD while working at the Telstra Research Laboratories in Clayton as senior research engineer.