How to decide on flow, key choices, things that take the form-filler out of the flow. Includes when a transaction is only partially online.

How to decide on flow

Decide on flow using a ‘bottom-up’ — rather than ‘top-down’ — process:

To determine question order, the best way to think about the form is as a conversation. The key principles of successful conversations that apply to forms are:

These principles are summarised in this diagram: 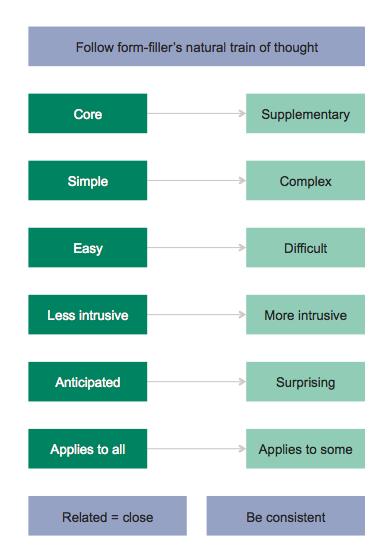 Often, these principles may be in conflict with each other and, or with, what seems like a logical order or natural flow for the form. This is because good form design is as much an art as a science. Having said that, usability testing can be an extremely useful way to inform this art, providing guidance on which principle is more important in the given context.

Because some people prefer scrolling while others prefer paging, there is no hard and fast rule about the number of steps a form can or should have.

As such, you should lean toward fewer, longer screens rather than more, shorter screens.

For a lengthy form, when it comes to scrolling versus paging, there are two extremes:

Regardless of which option it is, extremes lead to poor user experience. So:

Note also that it's the perception of time that affects form-filler burden and satisfaction, and as such, screens with complex questions may need to be shorter than screens with simple questions.

Things that take the form-filler out of the flow

Where possible, include information directly in the form, so there is no need for the form-filler to go elsewhere (in Q&A in forms, see the section on self-contained, self-explanatory questions); and provide Help (see Layout of forms).

When it is not possible for necessary information to be included in the form, provide a link to the information:

Using the link should open a new browser window, so the form window is maintained. Normally we would let the user decide whether or not to open in a window; here we make that decision on their behalf, to maximise completion.

If your site uses words (for example, 'opens in a new window') or symbols to indicate that the link will open in a new window, use those words/symbols for links that take the form-filler out of the flow.

When a transaction is only partially online

Online transactions should be wholly online

Ideally, form-fillers will be able to entirely complete the transaction online, so that the task is finished when the completion screen shows (see Layout of forms - key screens).

Signatures can be provided electronically

When steps must be done offline

If there are steps must be done offline – for example, if an in-person interview is needed — do not show the completion screen after the last online step. Instead, show a screen like this: 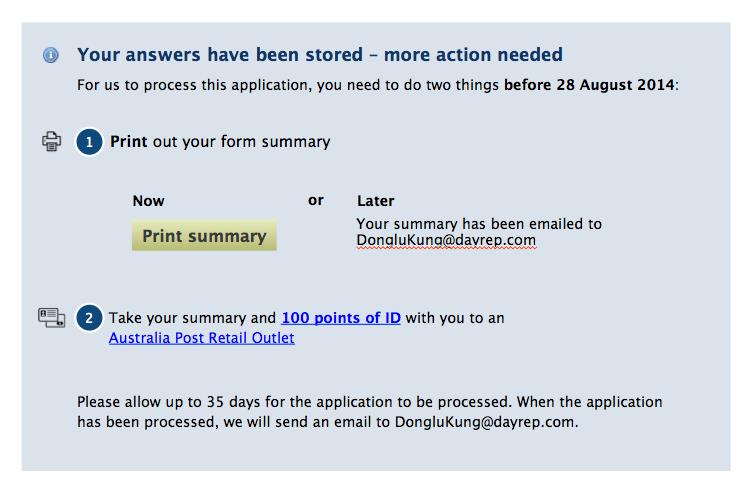 This screen must only ever be shown after the last online step. In other words, this screen comes after any ordering and payment screens. If this is not done, form-fillers get confused and do not follow the necessary process, as confirmed by testing for both Working With Children Check Unit and Births, Deaths and Marriages.

On this screen, note how the:

Icons have been included but using icons is optional. The icons shown are indicative only, but they do demonstrate the characteristics of usable icons: illustrative, intuitive and uncomplicated.