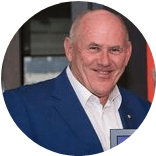 Medal of the Order of Australia for service to education and language learning through the coordination and provision of services for people from linguistically and culturally diverse backgrounds.

Stefan currently holds leadership roles within broader Australian and Ukrainian communities including the Australian Federation of Ukrainian Organisations, secretary general of the Ukrainian World Congress and is a member of the Starlight Foundation Victorian Advisory Board.