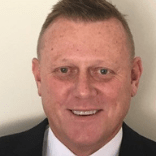 Alistair McCooke has rescued dozens of people from dangerous surf during his decades-long volunteerism as a surf lifesaver in Ocean Grove and Coolangatta. He is also an intensive care paramedic who has helped establish emergency response service programs in Saudi Arabia and assisted the United Nations with landmine clearance projects in Iraq.

Alistair is a passionate campaigner and educator for Heart Safe Communities, ensuring that automatic external defibrillators (AED) are made available at private and public events. Statistics show that for every minute a patient suffers sudden cardiac arrest without receiving a shock by a defibrillator, their chance of survival decreases by ten percent. Alistair’s efforts in promoting AED garnered him an Australian Surf Lifesaver of the Year award.

In 2013, Alistair was diagnosed with multiple myeloma, a cancer of the bone marrow. Being a strong believer in the power of positivity and self-belief, Alistair draws strength from the challenges presented by his ongoing fight to overcome his illness. Public speaking engagements continue to drive the hopefulness of living with cancer and promoting his strategies to think positive.