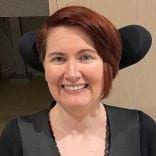 2011 VIC Young Australian of the Year

In 2011, Angela (Anj) Barker OAM was named Victoria’s Young Australian of the Year in recognition of her anti-domestic violence advocacy and education after receiving significant injuries from a violent attack by her ex-boyfriend. Her continuing community work saw Anj awarded the Medal of the Order of Australia in 2019.

Anj educates the public on anti-violence, holding talks for students, women, men, police and politicians Australia wide. In 2004, Anj’s story Loves Me Loves Me Not featured in the Federal Government’s Violence against Women, Australia says No campaign to educate young people about domestic violence and respectful relationships. This DVD is still in use throughout Australia.

Anj campaigns to stop young people ending up in nursing homes, as this is where she was for two-and-a-half years as part of her recovery following the attack. She has also advocated for the National Disability Insurance Scheme so that people with an acquired brain injury can have an equal opportunity to regain an active and productive life.