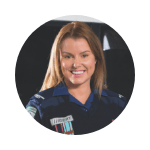 Born and bred in Craigieburn, Casey Nunn has poured blood, sweat and tears into volunteer work for her local community. Aged just 35, she has volunteered with Ambulance Victoria for over 17 years and the Country Fire Authority (CFA) for 11 years, was an honorary member of the Craigieburn State Emergency Service and is currently Chairperson of the 3064 Salvation Army Advisory Board.

Perhaps Casey’s most notable contribution has been as a volunteer with a Community Emergency Response Team (CERT) for Ambulance Victoria. CERTs provide an emergency medical response to 000 calls when an ambulance is not locally available. Casey rose to become a Team Leader, a position she held for four years. Under her leadership, the Craigieburn team became the benchmark CERT in Victoria. In 2011, Casey was awarded the Ambulance Service Medal, the highest individual honour for Australian ambulance services.

Casey is also an operational support volunteer with the CFA. Her husband is a full-time CFA firefighter, so emergency services are an extension of both their lives. She was awarded a National Emergency Service (Bushfires 2007) clasp for providing emergency relief during the Black Saturday bushfires. She also worked around the clock during the Kalkallo and Mickleham fires (2013 and 2014) providing food and support for the firefighters.

In 2012, she received an Emergency Services Foundation scholarship. This prestigious award allowed her to travel to the US and Canada to learn from other volunteer emergency services.

Casey was elected to Hume City Council in 2012 and, in 2013, became its youngest mayor at the age of 30. During her term as mayor she introduced Young Mayor of the Month, a program to help young people understand local government.

Casey is a local hero and a true leader. Her volunteer work has been vital to her community and her support of upskilling and leadership in others will continue to make a difference into the future.