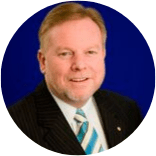 Member of the Order of Australia for significant service to the community of Victoria, particularly through charitable organisations, to business, and to the promotions and marketing sector.

David Mann AM, best known as Mann About Town, plays the part of roving on-air reporter for 3AW. David also runs his own marketing and public relations company, Mann Promotions Pty Ltd, which consults many companies and not-for-profit organisations around Australia.

David began his working career at 3AW as an office boy in 1973. He was soon promoted to panel operator and given a cadetship in journalism, quickly moving to an on-air role as a radio personality for the following 20 years. For four decades now, David has held various roles within the company, including production manager, creative director, and promotions and marketing manager.

Beyond broadcasting, David has worked in an operational capacity with Victoria Police, the Metropolitan Fire Brigade and Ambulance Victoria. His three decades of service to our emergency services earned him the Medal of the Order of Australia in 2006.