Lou Bennett is a performer, songwriter, musical and artistic director, composer, actor, soundscape and music designer and educator from the Yorta Yorta and Dja Dja Wurrung people in Echuca, Victoria. 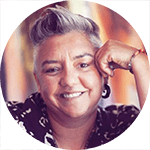 A former member of the internationally acclaimed trio Tiddas, and a consummate performer who has played to audiences worldwide, Lou’s career spans 29 years in the arts industry. In 2006, Lou was one of the cofounders of the Black Arm Band, one of Australia’s leading performing arts companies. As artistic director and co-CEO, Lou was instrumental in the company’s transformative journey from a one-off project to an Aboriginal and Torres Strait Islander governed, not-for-profit major performing arts company.

Throughout Lou’s time at the company (2006–2014), she was involved in the touring of five major productions on a national and international stage. Lou was also a major contributor to the establishment of the company’s community engagement workshop program.

Lou completed her PhD by project at RMIT in Melbourne in October 2015. Lou’s dissertation discusses the importance and relevance of Aboriginal language retrieval, reclamation and regeneration through the medium of art to community health and wellbeing. The paper also explores the importance of Indigenous epistemology, methodology and pedagogy in artistic and academic contexts.

As the McKenzie Postdoctoral Research Fellow at the University of Melbourne, Lou continues to research the obstacles and ethical issues related to retrieving and transmitting Aboriginal languages cross-culturally and across different generations.