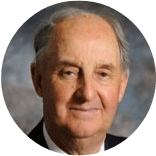 Medal of the Order of Australia for service to education, in particular the Australian Secondary Principals Association, and to the community

Duncan Stalker OAM, through his work as an educator, leader and community service contributor, has been readily recognised with innumerable awards.

After a time as an electronics production engineer with Phillips Electrical Industries, Duncan began teaching high school maths and physics in Victoria. He became vice-principal at an Echuca school before moving to Warrnambool where he would be principal of Brauer College for 23 years.

Duncan is the vice president (country) of the Victoria branch of The Order of Australia Association, member of the finance and general committees of the Warrnambool RSL and former president and Paul Harris Fellow of the Rotary Club of Warrnambool.