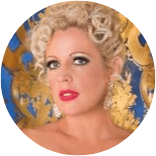 Emily Burke is an opera singer, lover of wine and cherry ripes from Hobart who is constantly called upon for performances in Australia and abroad. Her career was kickstarted after appearing as a contestant on the highly successful ABC television series Operatunity OZ.

In 2006, Emily made her operatic debut singing the role of Gilda in Rigoletto for Opera Australia. Debuts with Victorian Opera, Opera Queensland and internationally in Tokyo closely followed.

Emily’s operatic roles include Madam Butterfly, Mimi in La Boheme, Rosalinde in Die Fledermaus, Pitti-Sing in The Mikado, Frasquita in Carmen, Clorinda in Cinderella and The Widow in The Merry Widow.

Emily has most recently launched her own autobiographical opera, Diva: Always Sublime, Sometimes Ridiculous. The show is a night of songs and stories that come together to tell how she came to be one of Australia’s best-known sopranos.