Evelyn Maud West, known as Miss Eva West, was a community leader in rural Victoria and a pioneer of women in the accounting profession. 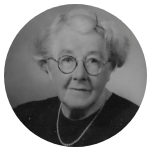 Eva was born in Traralgon in 1888 and began her career as a bookkeeper with her father’s carriage business.  Her father was a local Councillor and later Shire Secretary, and it was through him that she absorbed an interest in local government.

Eva was the third woman in Victoria to pass the Municipal Officer exam, enabling her to qualify for a senior local government role. She was employed by the Shire of Jeetho and Poowong as Assistant Shire Secretary in 1915, before moving to Melbourne to work with the Country Roads Board.

Working by day and studying by night, Eva, along with Irene Bourne, did what no other woman had done before her: passed the final exam of the Incorporated Institute of Accountants in 1916.

Following the Attorney General’s approval in 1916 that “lady candidates” could undertake the exam for the Company Auditors, she received certification as a licensed auditor in 1918. Later that year Eva, Irene and Mary Humble became the first women in Victoria and second in Australia registered to act as licensed accountants.

Eva returned to Traralgon in 1921 to open an audit and accounting practice, and commenced work at the Shire of Traralgon in 1922.  Initially Assistant Shire Secretary to her father, she was appointed Shire Secretary in 1934 and for the next decade guided the transition of the town from an agricultural base to a developing industrial economy. Eva held her audit licence for 50 years and practiced consistently until the late 1960s.

In 1958, she was made a Member of the Most Excellent Order of the British Empire (MBE) for service to her community.

She died in June 1969 and will be remembered for her remarkable leadership in her profession and dedicated service to Traralgon.