The Honourable Monica Gould is a former Victorian Minister, and served as Victoria’s first and only female President of the Legislative Council. She is a role model for women’s political representation, resilience and achievement. 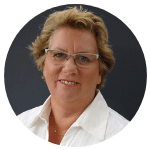 Monica began her career in the union movement, where she advocated for the poorest paid women in the manufacturing industry and eventually became Vice President of the National Union of Workers.

She played a significant role in advancing the representation of women in the Victorian Branch of the Australian Labor Party (ALP), leading work to establish quotas for women in pre-elections and in internal elections.

In 1993, Monica was elected to the Victorian Legislative Council from the Doutta Galla province, a seat she held for over 10 years.

In 1999, she became the first woman Leader of the ALP in the Legislative Council, a crucial leadership position in a tumultuous time for Victorian politics. She went on to become the Minister for Industrial Relations that same year, providing steady leadership through several difficult industrial disputes. She then served as the Minister for Education Services and Youth Affairs. It was at this time that Monica became the first woman from Victoria to join the ALP’s National Executive.

Following the 2002 election, Monica made history by becoming the first woman President of the Legislative Council.

Monica has continued to serve her community following her retirement from politics. She is Deputy Chair of the charity Youth Projects, the St Vincent’s Foundation, and the Labor Union Co-operative Retirement Fund’s Community Partnerships Trust.