General manager of Multicultural Banking at Commonwealth Bank of Australia 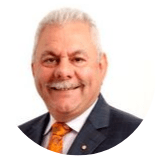 Medal of the Order of Australia for service to multiculturalism, and to the business community.

Huss Mustafa OAM is a proud Australian with Turkish-Cypriot heritage who immigrated with his family at the age of 10. Under very difficult circumstances, Huss was able to learn English in just over five years, pass his grades and at the age of 16 obtained his first job at the State Bank of Victoria.

Huss is now a senior executive with 45 years’ experience at Commonwealth Bank of Australia (CBA) and is the general manager of Multicultural Community Banking Australia, a division that he established in 2016.

For over a quarter of a century now, Huss has been active in promoting cultural diversity both in the community and within his workplace. He is part of the CBA’s Cultural Diversity Steering Committee where he leads important initiatives to promote a workforce that is reflective of our multicultural and multifaith community.

Huss also serves on government and non-government boards including chairperson of Multicultural Business Ministerial Council for the Minister for Small Business in Victoria. He has served a four-year term as commissioner at the Victorian Multicultural Commission.