A champion of women’s tennis, both on and off the court 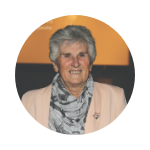 Judy Tegart-Dalton is a winner of nine tennis Grand Slam doubles titles. In singles, she was a finalist at Wimbledon and semi-finalist at the Australian Open, and achieved a career-high ranking of seventh in the world. She captained winning Australian Federation Cup teams throughout the 1960s and in 1970. Judy continued to excel as a player, becoming world singles champion in international veterans’ tennis.

While Judy’s on-court records are impressive, her actions off the court are her true legacy. Perhaps her most famous contribution to tennis was the role she played in bringing the issue of gender equality, in the form of equal pay in sport, to a global audience.

In 1970, a group of nine female players, led by Billie Jean King, broke away from the tennis establishment to form their own tour. They were fed up with the lack of prize money and support they received in comparison to their male counterparts. Their story became a Hollywood movie entitled Battle of the Sexes (2017).

As one of the ‘original nine’, Judy helped pave the way for women’s professional tennis and the foundation of the Women’s Tennis Association (WTA) in 1973. Their vision that women could make a living playing competitive sport is now a reality for hundreds of women playing on the WTA Tour. Judy continues to advocate for the advancement of female tennis players almost half a century later and has been President of the Fed Cup Foundation since 1990.

Judy’s contribution to the sport of tennis has been recognised with the Victorian Centenary of Tennis Award (1984), induction into Tennis Australia’s Hall of Fame (2013), the re-naming of Tennis Victoria’s Under 13 Regional Teams event to the Judy Dalton Cup (2016), life membership of Tennis Victoria (2019) and appointment as a Member of the Order of Australia (2019).