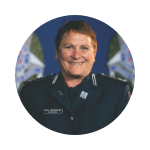 Lisa Hardeman had to wait until she was 21 years old to become a police officer. At the time, men could join the force at 18, but the minimum age for women was 21. She didn’t let that put her off and today she is Commander of the North West Metro Region with Victoria Police, overseeing almost 1,500 police officers across seven Local Government Areas in Melbourne’s northern suburbs.

Patience and determination have been key to Lisa’s achievements both with Victoria Police and in the world of women’s football. She has been an advocate and role model for women in the workplace and in sport for over four decades.

Lisa has been a champion for diversity and women’s advancement at Victoria Police: a founding member of the ‘Pride in Diversity’ working group, creator of the first divisional women’s committee and mentor to young women who aspire to leadership roles. As a superintendent, she covered the Local Government Areas of Brimbank and Melton, which achieved the highest percentages of women in leadership positions in the North West Metro Region.

Born and bred in Melbourne’s western suburbs, Lisa is an avid Western Bulldogs supporter. She had a distinguished football career herself but is best known for her role in the creation of a national women’s football competition. Lisa sat on the inaugural Victorian Football League (VFL) Women’s Advisory Committee, advising on the history and future of women’s football, the fastest growing sport for women in Australia.

Lisa was admitted into the Victoria Police Sporting Hall of Fame (2017) for achievements in football and awarded the Australian Police Medal in the 2018 Australia Day awards. The Melbourne and Western Bulldogs football clubs’ women’s teams have played for the Hampson– Hardeman Cup since 2013. Each year, Lisa presents the Lisa Hardeman Medal to the player voted best on ground in the VFL Grand Final.