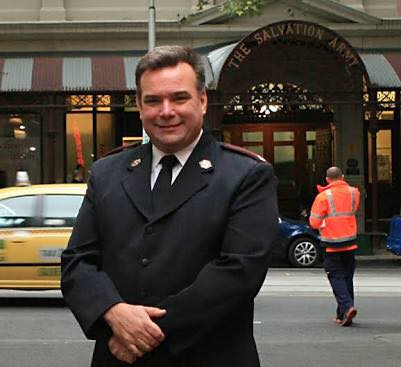 2020 VIC Australian of the Year Finalist

As Commanding Officer of the Salvation Army, Major Brendan Nottle has dedicated over 2 decades of his life to working with the most vulnerable members of society. Leading the Salvos' Melbourne Project 614, he works with a team of 1000 volunteers to help people who are homeless, or suffering from mental health issues, addiction or social poverty.

Going out on the streets of Melbourne, Brendan and his team provide practical support including meals, clothing and counselling – as well as working with clients to connect them with services that can facilitate their transition back into society. But most importantly, he forges one-on-one human connections that help people feel less marginalised and alone.

Brendan is a member of the Premier's Ice Action Taskforce and the Victorian Housing Minister's Rough Sleeper's Roundtable and frequently advocates for issues facing those at risk of homelessness. In 2013, he was named Melburnian of the Year in recognition of his tireless efforts to support disadvantaged people.