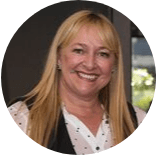 Maree Caldow is universally recognised in Victorian harness racing circles as one of its most influential and successful trainers.

With her husband, successful freelance reinsman John Caldow, Maree has made a sizeable impact on the industry since assuming control of the family’s Melton training establishment in the 1999/2000 season.

Maree proudly contributes to an industry that provides an indispensable social event bringing together communities, particularly rural and regional, throughout Victoria. The race meetings bring essential economic inflows to country towns and an opportunity to socialise in trying times when isolation can be the most biting.

Maree has trained four Group One winners including the Australasia Breeders Crown with Magic Interest and was the trainer of former Australian Mare of the Year, Nolarama. Her favourite win is the prestigious 2007 Redwood Classic with Lord of The Gym in her hometown of Maryborough. She has prepared over 800 winners that have accumulated more than $5.6 million in prize money.