Peta Searle is recognised as a strong role model challenging and transforming perceptions of women and leaders in sport, both on and off the ﬁeld. 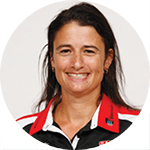 Peta Searle is an agent of change within the Victorian sporting community.

Over 20 years, Peta has made an extraordinary contribution to Australian rules football, which up until very recently has been a male-dominated sport.

In 2004, Peta was appointed as the development coach for the St Kilda Football Club, becoming the first female coach in the Australian Football League (AFL) - a remarkable achievement.

Peta’s coaching career has been marked with many firsts. She was the first Victorian Women’s Football League (VWFL) coach to coach a team - the Darebin Falcons - to five consecutive premiership final wins.

Peta was the first head coach of the AFL Victoria Academy and the first female to coach in the Victorian Football League (VFL). She was also assistant coach to Gary Ayers and played a key role in Port Melbourne’s 2012 VFL win.

Peta was also Head Coach for the Western Bulldogs Women’s team in the AFL’s first exhibition match. Throughout her career, Peta has challenged the notion that male sports require male coaches and leaders.

Her commitment and determination over a long period of time has been inspirational within both men’s and women’s football across Victoria. She has bridged community and elite sports and continues to champion girls and women at all levels of the game.

Peta promotes the benefits of involvement in sport, particularly football, to a wide range of audiences. As a speaker at schools and events, Peta provides thought-provoking insights into the benefits of coaching, teamwork and leadership.

Her career and legacy will inspire generations of future women in sport. As a coach, her role has not only been to encourage women to play a traditionally male sport, but for all women to believe that they can achieve their goals in all fields of life.