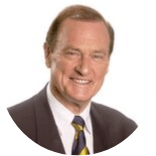 Medal of the Order of Australia for service to the community, particularly through voluntary promotional assistance to charitable organisations.

After graduating from Wesley College, Pete Smith OAM joined the Australian Broadcasting Commission where he spent eight years, initially as a messenger boy, before graduating to announcing on the home service and Radio Australia.

In 1964, Pete joined Channel 9, home of In Melbourne Tonight, where he presented commercials, appeared in comedy sketches and acted as compere. He was also an on-camera host for numerous specials and a National Nine newsreader throughout the 1970s.

Pete has had a long-time association with alumni of anarchic comedy troupe The D-Generation, featuring in many of their projects throughout the 90s and 2000s. He played a small part in Mick Molloy’s Crackerjack and a supporting role in Tony Martin’s Bad Eggs. He has also made a guest appearance on the current affairs spoof Frontline and performed in cabaret with Tony Martin, Mick Molloy and Judith Lucy.

Pete was the voice that boomed out for over 21 years on the popular quiz program, Sale of the Century.