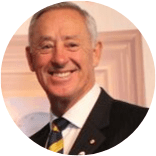 Medal of the Order of Australia for service to Australian Rules Football as a player, coach and commentator, and to the community as a supporter of charitable organisations.

AFL coach, elite athlete, media personality, entrepreneur and successful businessman, Stan Alves OAM’s multifaceted ability has taken him from the elite sporting arena into business management, back to sport and once again into the business world.

In 1994, he was appointed coach of the St Kilda Football Club where he took the club to two final series, won an Ansett cup pre-season competition premiership (their first in 30 years) and got them to their first grand final appearance in 26 years. When Stan departed in 1998, he became St Kilda’s second-longest serving coach and was rewarded with the 1997 AFL Coach of the Year Award.