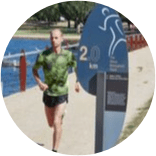 Member of the Order of Australia for significant service to athletics as a marathon runner, administrator and mentor to young athletes.

Growing up in Ballarat, Steve Moneghetti AM began competing in track events and rose to be one of Australia’s best-ever distance runners. He represented Australia through four Olympic Games, four Commonwealth Games and six World Championships. Steve’s achievements saw him inducted into the Australian Athletics Hall of Fame in 2017.

Steve still runs every day and holds a world age-record for a forty-six-year-old, running 10km in 29.59 minutes. This makes him the oldest person in the world to set a record under 30 minutes.