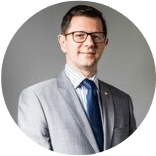 Medal of the Order of Australia for service to the community through a range of charitable organisations.

Vedran Drakulic OAM arrived in Australia in 1995 as a refugee from war-torn Bosnia. During the conflict, he served with the Red Cross as a logistics officer, interpreter and press officer. He worked on both sides of the frontline, providing humanitarian assistance to those in need.

In Australia, Vedran continued to work for the benefit of the community with Australian Red Cross, Oxfam Australia and the RACV. With these organisations, he brought to bear a skillset that had been honed under fire back in Bosnia. He is currently the CEO of Gandel Philanthropy, one of the largest philanthropic organisations in Australia, distributing $15 million annually to various causes.

Vedran is a proud “Bossie” (Bosnian Aussie) and is committed to giving back to his community. He actively supports many community organisations, including the Vinnies’ CEO Sleepout, where in the past four years, he individually raised over $250,000 for their homelessness programs. He is currently a board member of AMES Australia and Hobsons Bay Community Fund and a Trustee for the Betty Amsden Foundation.