Associate Professor Diana Egerton-Warburton is an emergency physician and patient-advocate whose research is driving systemic change in healthcare to benefit the lives of all Victorians. 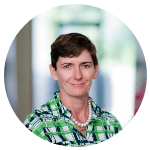 Diana is the Director of Emergency Medicine Research at the Monash Medical Centre and has worked for almost three decades in Victorian emergency departments. She has trained and mentored a new generation of emergency medicine specialists and is passionate about developing women in leadership roles. Her pragmatic, patient-centred clinical research drives sustainable, systemic change to improve patient care.

Treating victims of alcohol-fuelled violence in her early career, Diana was motivated to raise the impact of alcohol harm in the public health policy agenda. As Chair of the Australasian College for Emergency Medicine’s Public Health Committee, Diana is leading the largest ever study on alcohol harm in emergency departments internationally.  Awarded the 2017 VicHealth award for reducing the harmful effects of alcohol, this research contributes to a greater understanding of the scale of alcohol-related harm and occupational violence on health care workers.

Diana is an Associate Professor with the School of Clinical Sciences at Monash University and the National Drug Research Institute at Curtin University. She has advised the Victorian and Commonwealth governments on alcohol and drug policy. Diana served as President of the Australasian Society for Emergency Medicine from 1997 to 2000, where she was an advocate for the non-specialist workforce and recognised for her teaching, training, research and public health achievements.

A supporter of #foamED (Free Open Access Medical Education), Diana believes in the use of social media as an education, research and advocacy tool.  She uses an ‘investigate, innovate, evaluate and propagate’ model to produce effective, sustainable, cost-effective transformational change and improve patient care both nationally and internationally.

Diana was awarded the Australian Medical Association’s ‘Women in Medicine Award’ in 2016 for her “outstanding contribution to emergency medicine with a strong passion for public health”.