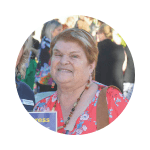 Aunty Lyn Warren understands the importance of family and community connections. The proud Yorta Yorta and Wemba Wemba woman, and loving matriarch of her own family, grew up not knowing her Aboriginal heritage or her own mother. Stolen from her mother as a baby, Aunty Lyn was raised by her paternal grandmother, unaware of her Aboriginality until she was 43 and her mother had already passed away.

She then discovered she belonged to a large mob who had been searching for her. Under the guidance of her mother’s sister, Aunty Lyn learnt about her culture and family connections. Reconnecting with her Aboriginal family and local Aboriginal Community was life changing.

With a desire to help others, Aunty Lyn joined the Bendigo and District Aboriginal Co- operative (BDAC), where she was Chairperson for 14 years and remains a director. She has also been a long term Board member at Women’s Health Loddon Mallee, Vice-Chairperson of the Bendigo NAIDOC Committee, on numerous other committees and involved in mentoring programs through Corrections Victoria.

Aunty Lyn has worked tirelessly to improve the lives of Aboriginal people in Bendigo and raise awareness of Aboriginal culture in the broader community. “Our culture is strong and we must keep it that way, for the next generation to carry it on”, she says.

She has supported other Aboriginal people who were separated from their families. She has also advocated for culturally appropriate messaging and approaches, such as BDAC’s involvement with vulnerable Aboriginal children in the child protection system.

In 2018, the NAIDOC Week theme ‘Because of her, we can’ celebrated the contributions of Aboriginal women to communities and Australian society. To Aunty Lyn, it simply feels “good to be able to assist someone in need”.