Marguerite Evans-Galea is an advocate for science and innovation. 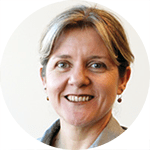 She is committed to empowering early career researchers and women in science and is a role model for the next generation of scientists.

Over the past 15 years, Marguerite has led international collaborations to better understand disease mechanism and developed novel therapies and biomarkers for repeat-associated neurodegenerative diseases.

The contributions Marguerite has made in gene and cell therapy, and in Friedreich Ataxia —a condition affecting children that results in progressive deterioration in motor function —have been recognised with national and international awards.

Through the Australasian Gene and Cell Therapy Society, Marguerite has also fostered greater ties between leading investigators in gene therapy and stem cell research, many of which are based in Victoria. Marguerite was recently appointed the inaugural Executive Director of the Industry Mentoring Network (IMNIS) in Science Technology Engineering Mathematics and Medicine (STEMM) with the Australian Academy of Technological Sciences and Engineering (ATSE).

A leading advocate for gender equality, Marguerite has empowered early career researchers and women in science through her work supervising students and fellows in Australia and America. In 2014 Marguerite co-founded Women in STEMM Australia, a not-for-profit association for women in STEMM. Her devotion to gender equality in STEMM supports initiatives that are working to foster change, while also upholding the core values of respect and scientific excellence.