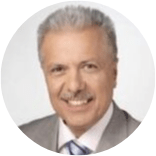 George Donikian’s television career began in 1980 on Australia’s revolutionary Channel 0, which evolved into SBS. As the founding anchor, George fronted the much-acclaimed World News Service in Melbourne and Sydney and then across the nation as SBS spread its broadcasting reach.

Since beginning with SBS, George has had a long and diverse career in Australian media. He has fronted news programs on both networks Nine and Ten. His passion for sport has seen him commentate and present rugby league, test cricket, World Cup soccer and the Sydney Olympics.

George has hosted many talk back shows on radio over the years in Sydney, Adelaide and Melbourne on the top-rating Radio 2GB, Radio 5AA and Radio 774.

In 2010, George set up Donikian Media to pursue feature documentary making as well as training executive level businesspeople to cope with the demands of modern media. In 2018, George was installed as the chairman of the 24/7 streaming radio service, Football Nation Radio.