Helen Marcou is an activist and advocate for the Victorian music community. She's dedicated much of her life and career to strengthening the nation’s music culture. 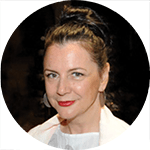 Twenty-five years ago, Helen and her partner Quincy McLean founded Bakehouse Studios (Bakehouse), an icon in the Australian music scene.

Fusing art, music and a deep sense of community, Bakehouse has been described as “the beating heart of the contemporary music sector and an internationally renowned oasis of creativity and artistic practice in inner Melbourne.”

Helen’s work at Bakehouse has nurtured and supported generations of musicians and artists. In 2010, Helen and her partner formed grassroots activist group Save Live Australia’s Music (SLAM).

SLAM galvanised 20,000 live music fans from across generations and genres to march and protest their right to experience and participate in live music. Over the next seven years, Helen was at the helm of this movement, participating on roundtables and working groups which ultimately resulted in national legislative reform.

Helen’s influential support and advocacy have fundamentally changed the relationship between the contemporary music industry and government in Victoria.

The SLAM rally resonated as a true expression of a generational challenge to the impact of art and contemporary music within our culture. The political and regulatory changes directly linked to SLAM include world first planning reforms that will protect music, arts and cultural venues from encroaching residential development.

In 2015, Helen was instrumental in the formation of the Victorian Government’s ‘Sexual Assault and Harassment of Women in Licensed Venues Taskforce’. The taskforce aimed to stamp out and prevent incidents of sexual assault and harassment through policy and education.

Helen has provided support, advocacy, inspiration and a voice to many women’s struggles to maintain relevance and be heard within the music industry. Her work has been unpaid, voluntary and always available to her community.