Karen Hayes, CEO of Guide Dogs Victoria, is a well-respected leader in both the Australian business and not-for-proﬁt sector. 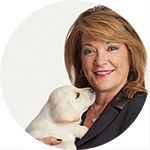 Karen Hayes is a well-respected leader in both the Australian business and not-for-proﬁt sector. As CEO of Guide Dogs Victoria, a founder of the Breast Cancer Network Australia and through her role in the development of women’s football in Victoria, Karen has made a lasting contribution to Victoria and the nation.

Karen played a key role in developing the Breast Cancer Network Australia (BCNA) when it was first established in 1998. Today, BCNA is the peak national organisation for Australians affected by breast cancer and supports a network of more than 110,000 members and 300 member groups.

In May 2010, Karen led the partnership between the Melbourne Football Club (MFC) and BCNA to deliver the ‘Field of Women’ event at the MCG. The event saw 14,000 people dressed in pink fill the stadium, representing the number of women diagnosed with breast cancer every year.

Field of Women is now a major fundraising event for BCNA, with participants raising awareness about the symptoms and impact of breast cancer. Karen’s leadership role has made a considerable impact on the development of women’s football in Victoria.

She developed the ‘Women of Melbourne’ program for MFC, aimed at engaging women in AFL football. Melbourne is now recognised by the AFL as the leading club in promoting the role of women in football.

As CEO of Guide Dogs Victoria, Karen has transformed the iconic Australian organisation into a service that provides independence, mobility and self-esteem to many visually impaired Victorians. Karen has played a central role in building strategic partnerships with both federal and state governments and public service organisations to advocate for equal rights and access for Victorians living with low vision or blindness.