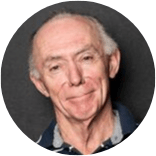 Lawrence Money was a newspaper columnist for 37 years before leaving The Age in 2016 after 50 years in journalism. He was twice named Victoria’s best columnist as a winner of the Melbourne Press Club’s Quill award.

A multifaceted man, Lawrence has written six books, appeared on ABC and commercial radio, designed a family boardgame and, in a busy retirement, has become a stand-up comedian with a show part of the recent 2019 Melbourne International Comedy Festival called Loose Change.

Lawrence’s material is largely informed by his observations of the oddity in what Australians take for granted as normal. His most recent book, Amazing Aussie Bastards, is a tribute to the indominable eccentric Australian spirit and those who embody it. His upcoming book, You’ve Got To Be Joking, is inspired by his recent touring into the regional heart of Australia as a comedy performer.