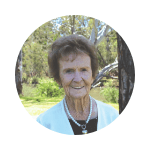 In 1967, Lorna Morris suddenly became owner and editor of the local newspaper, the Numurkah Leader, after the unexpected death of her husband. She was a young mother with five children, ranging from five months to 16 years old.

Lorna was approached about selling the business, but she decided to persevere. She was then abandoned by her journalist and printer, who were unwilling to work for a female boss. In debt and with only a basic education, Lorna juggled the roles of journalist, editor, photographer, bookkeeper, cleaner and single mother.

Lorna had to overcome many obstacles, but at a time when married women couldn’t even open their own bank account, she was owner and operator of an independent newspaper.

Customers would ask for the boss and then ask to speak to a man when they discovered the boss was a woman. Jaws dropped the day she walked into a room of 200 men at a Country Press Conference – she was the first woman to ever attend one. As Lorna recalls, “you could’ve heard a pin drop”.

Despite her family and business commitments, Lorna’s involvement with local community and sporting organisations was outstanding. A major volunteer role was that of court networker in the Melbourne Magistrate’s Court. She also contributed greatly to her family’s sporting clubs – coaching her daughters’ netball teams, writing up her sons’ footy match reports, regularly washing jumpers for entire footy teams, and taking on club and association roles for her own sporting pursuit of golf.

Lorna has long been recognised as a trailblazer and was Bulletin’s 1979 Business Woman of the Year. Now at 90 years of age, she has also received numerous other awards in recognition of her work, including an Order of Australia Medal in 2008 for her dedication to the Numurkah community.