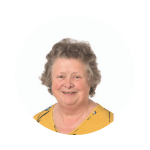 Mary McGowan’s work as a paediatric oncology nurse has never been ‘just a job’. She has devoted both her professional and personal life to helping children with cancer and their families.

Mary started at The Royal Children’s Hospital in 1978 and has worked there ever since. Over the years, cancer treatments have improved dramatically and Mary has seen improved survival rates for many cancers. However, she has also witnessed the pain and suffering of children with cancer and its often devastating consequences.

From the beginning, Mary was determined to improve her patients’ quality of life. She became an advocate for “her kids” and their families, supporting them through their difficult journey.
From humble beginnings – fundraising to brighten the decor of the children’s cancer ward and the drab parents’ room – Mary went on to raise hundreds of thousands of dollars for numerous charities. She has been a long- term board member for major children’s cancer organisations.

She has also been elected to professional organisations, including the Childhood Cancer International Board (since 2014).

Mary recognised that for parents travelling from rural towns, having a place to stay near the hospital during their child’s long and intensive treatment was extremely important. As a director of the Parkville Ronald McDonald House (for 21 years), she advocated for cancer patients to have priority access to accommodation.

Mary has been awarded The Royal Children’s Hospital Chairman’s Medal (1993), White Flame Award by the Save the Children Fund (1998), Ronald McDonald House Charities Hall of Fame (2004), Pride of Australia – Victoria medal (2006) and the Graham Woodruff Memorial Medal (2016) while part of the Cytotoxic Cyclists team raising funds for the Children’s Cancer Foundation.

Over 40 years, Mary has given countless hours of her own time, building a community that continues to help so many. This is an amazing achievement and a significant legacy.