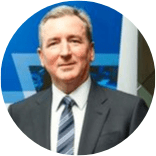 Greg Sassella served as a paramedic for many years prior to becoming an intensive care flight paramedic. He then progressed to lead the Metropolitan Ambulance Service through its amalgamation into Ambulance Victoria, a position he held until his retirement in 2014. His tenure at the head of Victoria’s ambulance services saw unprecedented development in its capacity, effectiveness and organisational sustainability.

Greg was chairman of the Council of Ambulance Authorities, Australia and New Zealand and served on the federal Australian Health Protection Committee for several years in the early 2000s. His more recent community work has been with the Pancare Foundation.

Greg was appointed in 2016 as an Honorary Professorial Fellow by Monash University and today lectures the online master’s degree in management and leadership in health.