Sheila Byard is a tireless local and international campaigner for gender equality. 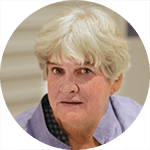 She has spent many years completing policy research and making submissions to parliamentary inquiries.

Sheila’s interest in Australia’s international humanitarian work began during primary school when she joined Junior Red Cross. Sheila has a strong commitment to the principles of equality and social justice, and a keen interest in citizenship and civics education.

After completing degrees in both arts and education, and further study in political science, Sheila spent 30 years in research and teaching in Victorian universities. She has served on various committees and boards, as well as working with community and social housing groups helping with projects, submissions and reports.

Sheila is a long-term, active member of the United Nations Association of Australia (UNAA) – Victorian Division. As Convenor of the UNAA Status of Women Network, she has been a mentor and supervisor for many tertiary students on placement with UNAA.

In recent years, Sheila has focused on advocacy relating to the implementation of UN conventions and protocols in Australia, particularly the Convention of the Elimination of All forms of Discrimination Against Women, and matters such as trafficking and forced marriage.

In recognition of her significant contributions, Sheila was awarded the Medal of the Order of Australia for her services to women in the 2016 Queen’s Birthday Honours List.