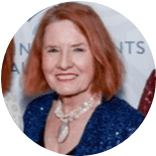 For nearly 20 years, Susan Calwell was the executive director of Australia's premier tourism promotion authority, the Melbourne Convention and Tourism Authority and its predecessor, the Melbourne Tourism Authority. She is frequently consulted regarding the proposed development of important tourism infrastructure and resources and has had direct involvement in the implementation of major projects.

Susan has dedicated herself to many tourism-related organisations and charities, including as chairman of the Baker Medical Research Institute Special Events Committee, board member at MECWA Community Care, and appeal chairman for the Noel Miller Centre Appeal. She was the inaugural chairman of the Melbourne International Flower and Garden Show, a hallmark event which attracts over 120,000 visitors annually.

Susan has been an active part of Victoria’s writing community. She has authored two best-selling books: There’s More to Life Than Sex and Money and There’s More to Life: The Little Book of Inspiration. She also edited Turning Points, a collection of inspiring personal stories from prominent Australians including Julie Anthony, Eddie McGuire, Gai Waterhouse and Ron Clarke.