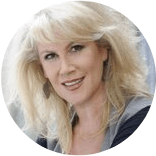 Wendy Stapleton started her lifelong entertainment career when she took up classical ballet, tapdancing, acting and singing as a child. By the time she was 9 years old, she had performed in Noel Coward’s Sail Away and would soon be a regular performer on television variety programs on GTV9. By age 16, she had performed with Australia’s all-time greats including John Farnham, Glenn Shorrock, Jon English, Joe Camilleri, among others.

In 1979, she signed with Mushroom Records and formed Wendy and the Rocketts, touring Australia and overseas with acts that included Brian Adams, ZZ Top, and Hall and Oates. Her self-penned single, Play the Game, went to number two on the national charts.

Her singing career has also embraced theatre performances such as, Bad Boy Johnny, The Magic Show, The Sentimental Bloke, What's Goin’ On, The Dusty Springfield Story, Two Up with Glen Shorrock, and Screen Gems with Dean Lotherington.

Wendy appeared on Neighbours, as well as in several episodes of Blue Heelers, Hallifax F.P. and Terence O’Connell’s short movie, You Don't Have To Say You Love Me.