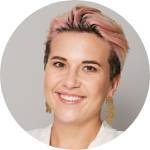 Zoë Condliffe is a data activist, gender advocate, researcher and founder and CEO of She’s A Crowd – a safe and anonymous reporting platform where women and gender-diverse Australians can report their experiences, which are used as data for advocacy and to inform policy and planning on a decision-maker level. The program has support from Google, the Victorian Government, the NSW Government, the City of Melbourne, Layne Beachley Foundation, SheStarts, FYA, the Australian Government and has collected over 10,000 stories to date. She is also a researcher in gender and place at Monash University under a PhD scholarship, and is exploring digital feminist activism to understand the impact on #MeToo on feminist activism.

Zoë started her first social enterprise in rural Cambodia and has since gained experience across the university, NGO and start-up sectors, becoming an outspoken leader on gender equality and the prevention of gender-based violence. In 2016, she started working in gender and youth advocacy for Plan International Australia, where she pioneered the digital crowdmapping tool for street harassment, Free To Be, the Youth Activist Series and Girls’ Walks.

She is a finalist in the Women Leading Tech Awards (2021) and a finalist in the Victorian Young Achiever Awards (2020). At 21, she was listed as one of Melbourne’s most innovative, influential and provocative people by The Age. She has also been listed on the Smart Company Smart30 two years in a row. She has done a TED talk on the gender data gap, and has won multiple pitch competitions, including the City of Melbourne Knowledge Week International Prize.

Zoë is a SheStarts alumni, and was sponsored by Google for Startups to travel to San Francisco to participate in the Blackbox Accelerator Program. She was a Young Social Pioneer with the Foundation for Young Australians.