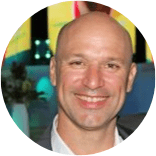 Damian Brown is an inspiring personality with outstanding sporting success, representing Australia in weightlifting at three Olympic Games, four Commonwealth Games and competing in a world-record 12 consecutive World Championships. He was also honoured as the Australian Team Flag Bearer for the opening ceremony of the 2002 Commonwealth Games.

Damian’s sporting success combined with significant business acumen, corporate savvy and life experiences sees him called upon regularly to guide organisations to success. Between 2000 and 2004, he was the Australian Olympic Committee Athletes’ Commission chairman and executive board member.

In 2000, Damian was among those recognised and awarded the Australian Sports Medal. The honour was announced by Prime Minister John Howard in 1998 and awarded in 2000 in tandem with Australia’s hosting of the Olympic and Paralympic Games. The medal was introduced to recognise Australians who contributed to the nation’s sporting success.