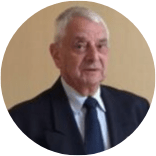 George Ermer was born on 30 November 1937 in Budapest, Hungary. He arrived in Australia in 1950, becoming an Australian citizen only four years later in 1954. In 1956, he performed his National Service with the RAAF at Laverton and continues to be of service to the nation to this day.

After leaving school, George sold electrical goods before moving on to Holden and became Victoria’s top salesman in 1959. He left the industry in 1961 when the credit squeeze hit and joined a meat company in Broken Hill where he spent three years before moving to Melbourne.

He served on the Victorian Board of The Variety Club as vice chairman as well as on the national board. He was a board member of Kids Under Cover for 11 years and was made a life ambassador in 2008 when he retired from the board.