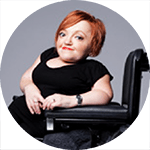 Growing up in the rural Victorian town of Stawell, Stella was born with the genetic condition Osteogenesis Imperfecta, which she described simply as ‘dodgy bones’.

She began studying Journalism at Deakin University at the age of 17 and soon became an avid voice within the disability community. Referring to herself as a ‘crip’, Stella controversially challenged people in the way they perceived disability and what it means to live as a disabled person. She described ‘crip’ as a liberating word; a term that seemed to horrify people but that made her feel strong and powerful.

For eight seasons Stella hosted award winning disability culture program No Limits, a show dedicated to open and honest discussion about disability. No Limits won the Human Rights Commissioner Award for television for giving people with disabilities a voice in the media and creative control over their representation.

In 2010 Stella joined the ABC as the editor of Ramp Up, an online portal and discussion platform for disabled people. Ramp Up deconstructed society’s habit of turning disabled people into stereotypes.

The concept was further popularised in 2014 with the TEDxSydney talk “I’m not your inspiration, thank you very much.”

Stella made her solo debut at the Melbourne International Comedy Festival in 2014 with her show ‘Tales from the Crip’, a performance that won her Best Newcomer. Stella was able to use comedy to tell witty anecdotes about her experiences as a disabled woman and to evoke social change.

In addition to her writing and comedy, Stella was a member of the Victorian Disability Advisory Council, the Youth Disability Advocacy Service and Women with Disabilities Victoria.

Prior to her death, Stella wrote of how she wished to be remembered. “I am not a snowflake. I am not a sweet, infantilising symbol of fragility and life. I am a strong, fierce, flawed adult woman. I plan to remain that way, in life and in death.”

Stella’s legacy continues to challenge, educate and strengthen society and its perception of disability today.