About the Victorian flag

Learn about the design and the history of the flag of the State of Victoria.

Design of the state flag

The flag of the state of Victoria is based on the blue ensign. It consists of a blue background with the Union Flag in the top pole-side quarter. In the background area there are five white stars representing the Southern Cross. Above the stars is a St Edward’s Crown. 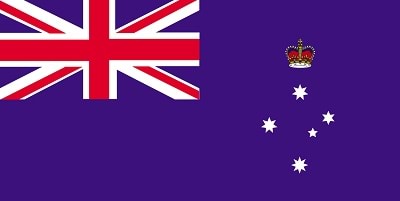 History of the state flag

Victoria was the first Australian colony to have its own flag.

The Imperial Parliament in the United Kingdom passed the Colonial Naval Defence Act. This act empowered Australian colonies to provide, maintain and use vessels of war. As a result of this, each colony needed to have its own distinctive flag.

In December a dispatch from the Secretary of State for the Colonies required that all colonial vessels of war wear a Blue Ensign with the seal or badge of the colony in the fly (the half of the flag furthest from the staff) and a blue pennant.

On 4 February the Governor proclaimed that the design of the Badge of the Colony of Victoria be of 'five white stars, representing the constellation of the Southern Cross'.

On 10 February the Argus newspaper reported the first flying of the Victorian flag:

An event of some importance in the history of the Colony – the inauguration of the flag which has been adopted as our national ensign – took place on board HMVS Nelson (Victoria’s first colonial warship) yesterday, and the inaugural ceremony was made the occasion of a very pleasant trip down the Bay...

On 12 November the Governor proclaimed a change to the design of the Flag of the Colony of Victoria:

I, the Governor of Victoria, do hereby direct that all vessels belonging to, or permanently in the service of the Government of Victoria, shall wear the Blue Ensign, having in the centre of the fly thereof the distinctive Badge of the Colony, viz – five white stars, representing the constellation of the Southern Cross, surmounted by an Imperial Crown.

On 19 September The Honourable Sir John Madden KCMG, Lieutenant-Governor of Victoria, informed the Secretary of State for the Colonies that Victoria would now be referred to as a 'state' in place of the word 'colony'. He also advised that in the design of the state flag, the crown would take the form of the St Edward’s Crown.

The design of the state flag has not changed since.

Organisations can be notified when flags should be flown at half-mast or flown for special events by joining the Victorian Flag Notifications Network.

Information about the Australian flag and a full range of national flag protocols can be found at the It’s an Honour website.

Find out more about the Aboriginal and Torres Strait Islander flags.

Learn about the Australian national flag

Information about the meaning of the parts of the Australian national flag and its history.

Learn about other Australian flags

Protocol and Special Events Department of Premier and Cabinet