What is alternative text, why it's important and examples of proper use.

What is alternative text?

Alternative text provides a textual alternative to non-text content in web pages, such as photographs, logos and other images.

All of these functions are important so you must provide alternative text wherever practical.

Alternative text can be presented in two ways:

Using an image caption instead of using an ‘alt attribute’ may be more appropriate in some contexts. For example, a photo within an article.

When using a caption it’s important not to duplicate the alternative text so the ‘alt attribute’ should be left blank in this case.

In many cases using a caption won't be possible, so an ‘alt attribute’ must be used.

Examples of proper use 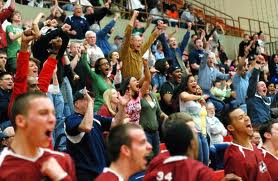 With an image or photograph it is good to explain the scene in detail while also keeping the description short.

You don't need to state that it is an image because screen readers make the user aware of this automatically. You may, however, state whether the image is a photograph or illustration if it’s important for the user to know.

'Photograph of a large, diverse group of cheering students, standing up and fist-pumping on the bleachers of a basketball game.'

'Image of a crowd at a basketball game.'

There is no need to state that this is a logo. However the company or department name must be used.

When an image is also a link, screen readers will make this clear to the user, so there's no need to state that it's a link. However, it is important to indicate where the link will take users. In this case it will take users to the homepage of the website.

'Site logo. Click this link to go to the homepage.'